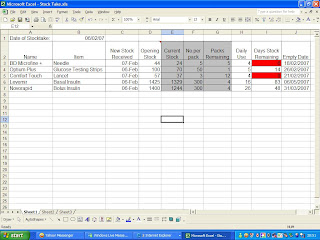 Had a good day today. Levels seem to be alright and had a good chat with my nurse. Also had the haemoglobin test (A1C). This shows how your blood glucose levels have been in the last three months. My reading was off the scale, as expected! At least next time I have it, it should be a better reading. Had a chat with a nutritionalist too. He wasn't good and didn't seem to be able to offer us much. Maybe this was because we eat well at the moment, but was hoping for more. Most useful was a list of how many carbs are in foods. It even gave levels for things that are really off-limits (chocolate & KFC for example). At least now I can make informed decisions about what I do.

Did a stocktake of my stuff and worked out how much I had and how long it would last. I really like Excel and think I am quite skilled in it, although a little obsessive! I created a nice little spreadsheet to monitor the stock levels.
Had a great day at work, it is really helping with my confidence post-diagnosis. Was unexpectedly invited to a meeting at our site in the South of England where I was able to put my views across to an influential group of people, with some success.

Chatted with some people online yesterday including some people from the US and South Africa. They were all really nice and it was good to get some opinions, even though I found some of them a bit extreme. It is interesting that the advice is different in different parts of the world. Equally, healthcare varies...people berate the NHS, but it has excelled in my personal care so far.

justme said…
Hey!
Cool spreadsheet. I like excel too - using it to monitor my levels.
Cool what you have done with your supplies! I tend to just refill my insulin pens once i take out the second last one from the box. Lancets - they last me ages (i use them longer than I should). Needles also probably (not as long as the lancets though...)
Chat soon!
8 February 2007 at 08:07

Anonymous said…
Hello, Just happened upon your blog, sounds so similar to myself, I was only diagnosed type 1 2 weeks ago and still trying to get my head around it, if you would like to email and be a needle buddy you can email me at tjw1904 at btconnect.com. Tracy
8 February 2007 at 16:01