So, everyone's going to get Libre on prescription on 1st November?! 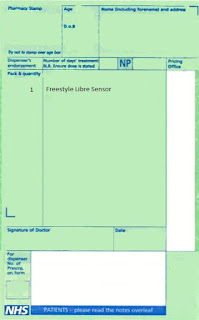 In short, they're not. Nobody has them on prescription yet (edit 03/11/17 - almost nobody - there is some evidence that a few people might have them, but yet to be totally convinced). There are a small number that have persuaded their doctor/specialist to fund, but it's difficult to know exact circumstances and it hasn't been done in a coherent way.

The situation became different from 1st November, in that it is now possible to prescribe the Libre. However, the budgets are controlled by the local health authority (CCG) and ultimately they decide whether to fund or not and who to fund it for. There could be a chance that a GP/Specialist could go 'maverick' and prescribe without authority...but like current funding, will be rare and not coherently managed.

The problem the CCG have is two-fold. Firstly, budgets run from April to April. Starting funding in November means that they'll have to find extra cash from somewhere to fund the Libre - at least initially, it is going to cost more.

Secondly, and perhaps more importantly, there's not guidance from NICE about who should receive the Libre on prescription. There is limited health economic data and only a few large-scale trials.  Cost-effectiveness is yet to be proven any more than anecdotally.

As patients, our best bet for getting coherent funding of Libre is through patient groups like JDRF, Diabetes UK and Input. Rest assured they are working very hard to make Libre accessible to as many of the people that really need it as possible.

Speaking to doctors etc. may increase awareness, but as for funding across a wide area, the patient groups are the ones that are likely to make the biggest difference.

This information is gathered from my reading and speaking to interested parties, so if anyone has any other evidence or info, please share.

PhilT said…
The case for NHS funding isn't black & white. Current user experiences are dominated by self selecting motivated users willing to fund themselves. The experiences of users on "free trials" or where NHS clinics apply the sensor to patients seem less clear cut.

The people with worst BG control are probably in denial or in some way impaired from getting on top of it, the Libre can give extra data but that doesn't help the data challenged.
3 November 2017 at 08:09