Driving with Libre - dispelling the myths?

It is absolutely true, the DVLA won't give you a licence unless you agree to the following:

The language, as with any legal document, is important here.  Group 1 is "recommended" and this is a "requirement for licensing".  I'm not a legal expert, but it does seem fairly clear, although not very satisfactory in my opinion.
Why does it say 'recommended' here?

So many times, I've seen people refer to breaking law if you're not a certain level or able to prove your level.  This is not what is being said.

At this point I must interject that it is irresponsible to drive any vehicle whilst low, going low or suspecting low.  Don't do it!  This is more about the law's view on levels and testing.

So, it now comes to why the law is at it is and why the Libre is not (yet) considered acceptable for the DVLA.  To get more information on this, you need to go back to the primary source - Secretary of State for Transport’s Honorary Medical Advisory Panel on driving and diabetes mellitus - reckon they could have come up with a catchier name!  Their publications.  From the March 2017 minutes (not published until September!): 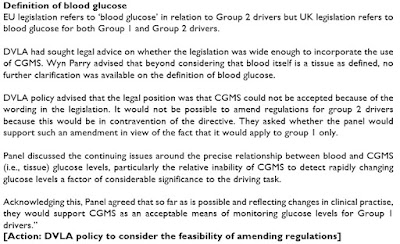 From this, it's clear that whilst the guidelines doesn't currently allow interstitial blood glucose to be acceptable for driving, a change is being looked into.  Interestingly, in the rest of the EU, this wouldn't be a problem.

The final piece of the jigsaw is the potential law that is being contravened if you do use Libre as your only testing mechanism.  Firstly, the DVLA could in theory revoke your licence as they are unable to accept Libre readings as evidence of a blood glucose level.  It is a condition of licence-holding to follow what they say, regardless of the law.  Secondly, if you have a hypo whilst driving, you may be charged with driving under the influence of a drug (Insulin or diabetes tablet), driving without due care and attention, or dangerous driving (Link to useful leaflet).  There is indication that the under the influence statement may not even be likely to be enforceable.  In order to defend any of these charges, the Libre would probably not be considered admissible evidence.  You'd only be charged with these offences however, if there was due cause to believe that you were unfit to drive.  Personally, I believe that self-funding of Libre is evidence of effort to control levels and the debate in court could be an interesting one - I'm not sure this has been tested in law yet (and hope it doesn't need to be).

This is a further element of diabetes care that people seem to get worried about.  It is right that you should know your levels and be controlled, but it is all part of the day-to-day management of the condition - not something to worry about.  Building testing into routines should be performed by all T1 diabetics (and probably T2s too) not just when driving but in order to effectively manage the condition at all times and in all situations.