Americans use mg/dl as the unit for measuring glucose levels. Most other countries use mmol/l. The relationship between the two is that 1mmol/l = 18mg/dl. I was interested to understand this relationship (as a former chemist) and also find out what it meant in practical terms. It is a bit sad, but here is my calculation: 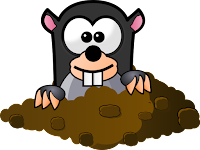 Finally, for those who are interested in how sensitive our glucose meters are, think about this. Mine does graduations in 0.1 mmol/l increments. As shown about 0.1mmol is 0.018g. I think it is remarkable that I have a handheld, portable device that can tell me differences of 0.018g of a substance in a litre of liquid! Probably bored you silly, but I didn't know why this relationship existed until I sat down and calculated it, so at least I have learnt something! 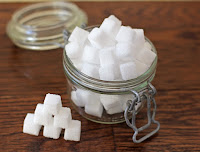 One more thing has struck me. How many grains of sugar is 0.018g? After some research, I think I may have found the answer. According to a site I have found, the density of granulated sugar is 849kg/meter cubed. Another site says that granulated sugar granules are cubes of side 0.5mm. Knowing the density and the volume of them you can work out the mass. Mass = Volume x Density. Not to bore you with the maths...1 grain of sugar weighs 0.106mg (as long as I have got my conversions right). Therefore 0.018g of sugar equates to about 170 grains.