October 02, 2017
So it seems everyone's doing it, they do it in cafes, on park benches, they do it with friends and they do it alone. Clearly, I'm talking about blogging. I did try it, over 10 years ago on this blog, when I was first diagnosed with T1 diabetes (diagnosis day post). Reading back over those musings is quite a moving experience showing how I coped back then with my recent diagnosis and how little I knew and was taught. The years have clearly shown progression somewhat along the lines of the Change Curve proposed by Elisabeth Kubler Ross. 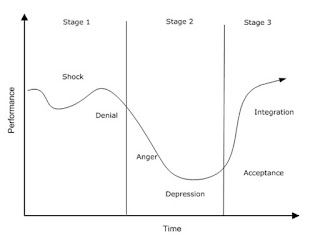 I can see how I went through most of those phases, all lasting different amount of times, some fleeting, but others lasting far too long.  I'm not sure I see it as a definite progression, with elements of denial and anger returning even when those periods have passed.

But that's quite enough management theory...at least for the time being!

So, thoughts turn what I can blog about - I guess keeping it related to personal experience is probably the way to go - perhaps people will empathise with what I say, perhaps agree and maybe even discover something about themselves that they weren't aware of.  The resumption of this blog arose from being invited to dinner with a group of influential diabetic bloggers, including Lydia who writes the excellent blog I've linked to and Lis Warren, hugely influential and inspirational in a range of fields including education, music and diabetes.  Talking to them, I realised how much of the community I was missing out on, but blogging had really passed me by (even though this blog started in 2007).  I also thought my life was far too boring for people to want to read my thoughts - perhaps I'm right, but just maybe...

I think most of my blogs will be about the Freestyle Libre system.  It is a life-changing piece of kit for managing diabetes and has been the source of endless discussions since its launch in October 2014.  My role as an administrator on the Freestyle Libre Facebook Group means that my thoughts are never far away from the system and helping others to make the most of it.  However, the end of that sentence, not the Libre itself, is the focus of this first renaissance of the blog...helping others...

Put your own life-jacket on first!

Much of my diabetic journey in the 10 years post-diagnosis has been about helping others.  I don't know what it is about it, it's just so fulfilling and immersing myself as part of the diabetic community has been the single key aspect that has enabled me to progress to the integration phase of the Change Curve.  The journey started back in 2007 on the Diabetes Daily forums and continued to present day activity with the Libre.  However, it wasn't until late 2016 that I received any formal training in managing my diabetes, when I attended a DAFNE course.  This was partly through choice and partly because I believed that I knew more than enough about how managed my condition.  I have to admit, though it pains me to do so, that the course did more to improve my diabetic control than the Libre or anything else in my 'dialife'.

So, was there anything ground-breaking?  Was there some magic that was taught during the course?  The answer was no (apart from a realisation that splitting Levemir to two doses is not just desirable, but essential).  What the course really enabled me to do was to take time for me - during that course, I didn't have time to think of helping others and had to focus on my diabetes and how I managed it.  It was a resetting of parameters and mindset.

So, the take-home message (to quote one of my lovely lecturers from many years ago) - is whatever your skills, knowledge and expertise, especially in the fascinating diabetes community, it is very important to forget the key person in the equation and that's yourself.  Sometimes, I prefer to help with other people's problems, rather than focusing on my own - it seems somewhat easier, more comfortable, less scary.  But actually, making sure you have your 'life-jacket' on first is important and taking time to reset and take stock may actually be highly beneficial.