May 30, 2007
After a long break from blogging, guess it is time to resume once more. It has been a busy few weeks. Highlight was last week's holiday in the New Forest. For those of you that don't know, the New Forest is located to the South West of Southampton. It is a beautiful area of unspoilt rolling countryside with extensive woodland and rights of ways. Animals including cattle and ponies roam wild and make it seem like a different world. It is definitely picturesque, but the volume of traffic that passes through the narrow lanes and small towns of the relatively small area make it difficult to get around. I hate to think what it would be like in the school holidays.

Anyway, we hired a cottage for a week. It was a Friday to Friday let, so we actually got the best of the early summer weather. The cottage was in a great location with lovely countryside views. This was the view from our bedroom: 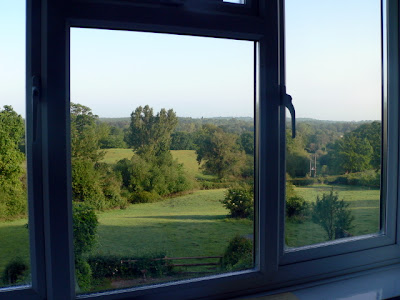 The village that we stayed in was called Emery Down, just outside the town of Lyndhurst. Some friends of ours live in the village, who have a 9-month old son, so it was great to be able to do some things with them. We went to a farm park on the edge of the forest and went swimming, as well as having a babysitter in and having a meal with just the adults: a rare luxury! The farm park was excellent and not too busy. Abby and Josh both loved the trampolines (or bouncealines as Abby called them) as well as the animals. There was also a chance to feed some goats, calves and handle some rather unfortunate baby rabbits and chickens: 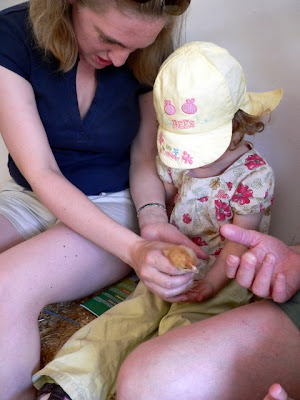 We also did some activites on our own, which included a trip to the rhododendron-filled Exbury Gardens (including a trip on their miniature railway) and a ferry ride to the Isle of Wight. A tip for the Isle of Wight, if you dock at Cowes: turn right and go across the chain bridge, not left and along the dull seafront as we did! However, Abby got right into the spirit of things: 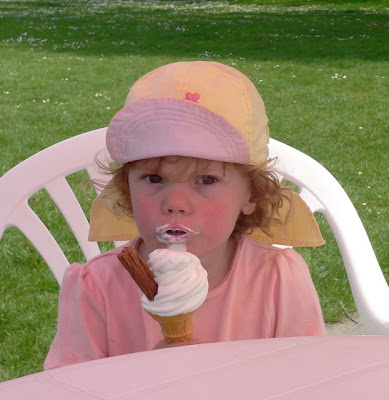 Josh seemed to be rather enjoying himself too: 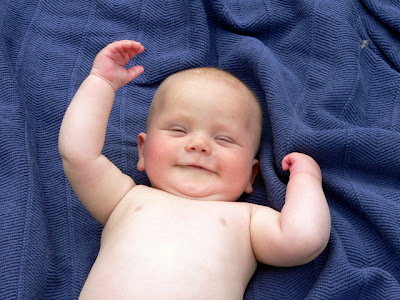 Unfortunately, Abby, Claire and Josh, but not me, got sick for the last couple of the days of the holiday which meant hard work for me and a bit of a miserable time for them. They are just now getting over it. The week was great and as I said the weather was lovely and summery and allowed us to do many activities that would have been rather miserable if the weather had been more inclement.

Other things that have happened include a visit to the Severn Valley Railway for the Thomas the Tank Engine day. 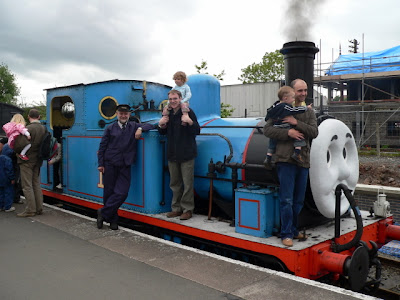 Abby (and if I admit it myself and my father in law) really enjoyed the day. It is great having a daughter who likes transport as I am rather partial to it myself. The weather held off for most of the day allowing us to jump on and off various trains without getting wet.

To more mundane things, my neuropathy has continued to be an issue. The pain is increasing once more. I am using the TENS machine, but I can't have it on all the time. Duracell are definitely benefitting from my condition! I am back at the hospital on Friday, so I expect they will increase my medication once more. I had blood taken yesterday, so it will be good to see how I am doing, including my latest A1C.

Strange things have happened in terms of my diabetes over the past couple of weeks. I suddenly started hypoing after every meal. I thought I must have miscalculated, but eventually, I changed the ratio of insulin to carbohydrate. After a few tests, I found that my ratio had change from 1u insulin to 10g Carb to 0.6u insulin to 10g Carb. This is quite a large change. Although I don't have a medical practitioner's explanation of this, I believe I may be in what is called the honeymoon phase of diabetes. What happens when you 'contract' diabetes is your insulin production drops off steadily without symptoms until you get to about 10% production. Then you get the normal symptoms of diabetes so start on insulin. This provokes the body to stop producing insulin altogether. After a while, as there are still functioning insulin cells (islets of langerhans), you start to produce your own insulin. This combined with the injected insulin controls your blood glucose and means you don't need to inject so much. This period can last up to 3 years, I have read.

Have sorted Josh's Thanksgiving Service and we have invited a small group of people to the service on 1st July. Although I have some reservations about the church, I think it will be a fitting service and, if the weather is nice, will enable us to have the post-service 'entertainment' in our 'buttercup meadow' (garden). Claire is working very hard to clear the buttercups before the lawnmower returns from being fixed. It has been away for nearly a month, so the grass is very long and is in desperate need of cutting. At least the rain is preventing us from being able to cut it at the moment.

Right, hopefully that made up for my lack of blogging. Will put a comment on my facebook page and see whether I get loads of new readers to the blog; probably not!