April 04, 2007
At last I feel I have the time and energy to post once more to my blog. Not that my calves are feeling any better, but at least the codeine I have been prescribed is giving me a little respite. I have now seen three different doctors (not by choice), an osteopath, my diabetic nurse and am going to a physiotherapist next week. They are all confused by my symptoms, so I don't hold out much hope of them sorting it soon.


So what have I been up to since I last posted? Well, lots, most of which is not at all interesting! We had an excellent time in York, even though we got snowed on. Abby loved it; the whole experience of going on a proper train, seeing the trains in the Railway Museum and going to the Minster. The guest house was great (Staymor Guest House) with the owner really making an effort to make all of us welcome. The breakfast was exceptionally good too. Below is a picture of Abby's favourite engine (we are the tiny figures in front of it!) 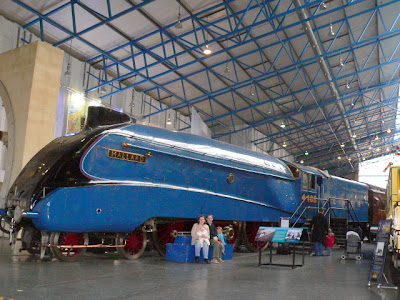 She even asked for a poster of it, which is now proudly displayed on her wall. She regularly tells me that it goes really really fast, but when she saw it, it didn't move! We plan other excursions around the country in the near future. We are going to the New Forest in the middle of May and plan to get the ferry over to the Isle of Wight. I think we'll all enjoy that particularly if the weather is good.

Josh continues to do well and is now on solid food once a day. He is interacting more with us and gives us lovely smiles and giggles, as shown below: 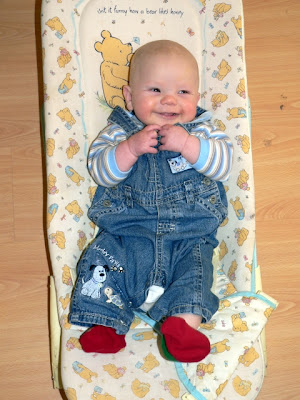 Abby has her moments...she is lovely most of the time, but she has some toddler issues! She is into everything and has an answer for every situation. She also gets into trouble occasionally. Last Friday, she came to Claire and said "Mummy, I have a raisin in my nose". Claire was a bit suspicious, but couldn't see anything, so let it past. "Mummy, my nose hurts!" At that point Claire lay her on the bed and shone a torch up her nose and lo and behold, there was a raisin lodge towards the top of her nose. An hour later after much effort by the team at A&E, said raisin re-emerged from its hiding place. Abby admits that she is a "big wally" for doing it and I don't think will do it again...let's hope not!

The weather is slowly improving and we spent much of last weekend in the garden. I have cut the grass again and it looks great. I also put some new roofing felt on the shed that had blown off in the winter. Seemed fairly successful, although as with most DIY tasks, I had no idea what I was doing! We have received planning permission for our extension, so once we have the building regs approval all is looking fine for starting work at the end of May. I will post photographs of progress once the work starts. I don't think we are quite prepared for the mess, stress and disruption that we are going to have to endure during the 14 weeks of construction. But I know it will be worth it.

I went to Aston Villa with my brother in law on Monday to watch the Everton/Villa match. Tim is an Everton fan, so I asked some people at work whether I could get tickets. As it happened, they said that I could have tickets for the hospitality box. We got a three course meal and excellent seats for the match. It was a great experience and one I should like to do again if I get the opportunity. There were 36,000 people at the match, so the atmosphere was electric. The standard of the football was fairly average, but a 1-1 final score was a fair result. My brother in law stayed for a few days. Abby dotes on him and made him read her endless stories and play football in the garden at all hours. I bet he has gone home for a rest! He now understands some of the remarkable effort that Claire has to put in to keep the children occupied and run the house.

Easter this weekend. I am working Friday, but we are going to my Mother's in Hertfordshire for the rest of the holiday period. It will give us some time to have a rest and Abby gets on well with her grandma, so will have fun. We will all also get spoilt rotten, but hopefully not as much chocolate as in previous years. I am still going to have an Easter egg or two, they will just not be eaten as quickly as in previous years.

We are going to a close friend's marriage convalidation on Sunday. This is a ceremony in a catholic church that recognises the marriage of two people, one of whom has been previously married (and divorced). It is a short, 15 minute service, but it will be nice to share the occasion with Kate & Justin as they are a lovely couple and are great together.

Finally, I got my first A1c result today: 9.3% The target is to be less than 7.5% but the result is affected by the blood glucose over the past 3 months and I have only been diagnosed for 2 months. A little disappointed, but I guess it isn't bad. Hopefully will be under 7.5% next time. My blood glucose averages are now coming down nicely. I think they are as low as I want or am able at the moment. My 7 day average is 5.9, 14 day is 6.4 and 30 day is 6.7. I am also now rarely over 10mmol/l (180mg/dl) which is my target. I am even managing to eat out occasionally and have sweet things and control my levels.

There are probably other things to blog, but I think I have written quite enough. I'll try not to leave it so long next time!

Unknown said…
Sorry to hear about your calves. Hope they manage to improve. It seems to be impossible to search for your blog on google don't know why. See you on Sunday!
5 April 2007 at 11:13

NickC said…
Have added the blog to google, so should be searchable shortly.