August 22, 2018
This month's update will be dealt with in two parts, both focusing on data; the first part summarising some data about the prescribing policies across England, the second my usual update on prescriptions fulfilled across the UK.

There didn't seem to be an easy way to compile this.  I used the Diabetes UK Map to link to the policies and then I cross-checked this with a Google search to see whether there was any more information.  I had to do this line by line for each of the 195 CCGs in England - quite a lengthy and tedious process.  However, I am pleased with the information arising from the data.

Firstly, the headline figures - how many CCGs were funding Libre, how many had denied funding and who were still undecided?  There are differences of opinion about these figures as some CCGs have not been clear (Staffordshire CCGs), and some have agreed to fund, but are yet to actually fund due to implementation difficulties (Lambeth, Bexley, Bromley, Greenwich, Lewisham & Southwark CCGs)

I've checked whether the percentage of CCGs roughly equals the percentage of T1 patients in each of the groups.  It does, with just over 62% of T1s in a funded area and 33% in areas where funding has been denied.

Fortunately, I didn't have to go through every single CCG one by one to work out what was happening.  There's much more collaboration going on than you might imagine.

Of the 195 CCGs, just 36 are acting independently.

The remainder are working in geographic groups, sometimes led by one of the APCs - e.g. Sheffield area - and sometimes advised by an external body - e.g. East of England.  Clearly this collaboration cuts down on admin, but reviewing some of these CCGs, the decision-making ability of some leaves a lot to be desired - .South Warwickshire, Coventry and Rugby for example - more about them later!

A criteria for prescribing  Libre has been published and agreed.  It was produced by the Regional Medicines Optimisation Committee (North) - RMOC (policy here).  This is a new committee and I understand that this publication is their first significant policy guide.  This could explain some of the CCGs deciding not to follow the guidance.  So, having read all of the policies that I could find, I made a judgement whether I believed they were following the RMOC guidance exactly (RMOC), whether they were following RMOC, but then making it harder to achieve (RMOC+), making it easier than the RMOC guidance (RMOC-) or a policy of their own making.

The two areas that are bespoke are Somerset (floor targets for T1s used) and Berkshire West (compiling data based on a cohort of 50 trial patients).

RMOC+ areas are generally those areas that have asked for 8+ tests a day but then (inexplicably) thought it appropriate to add one of the other RMOC criteria to the requirements.  This needs to be challenged as I would have thought that almost no patients would meet this criteria.  It makes no sense for someone to test 8+ times but then to have another of the criteria met like DKA admissions or poor HbA1C.  Having spoken with people in some CCGs, it appears that some of these decisions were made without consulting with experts in the area - not surprising considering that it is an illogical stance if you know anything about T1!

However, there's an interesting stat here.  One of the areas that is using RMOC+ is Nottinghamshire consisting of 5 CCGs.  The criteria says 8+ tests and another criteria - so my expectation would be that almost no prescriptions would have been fulfilled - however in June 2018, 284 prescriptions for Libre were written in these CCGs.  There is no chance that the criteria is being applied here as  as I'd be surprised if there were as many qualifying patients in the whole UK that met that criteria, let alone in a small locality.

If anyone wants the raw data, including information on which CCGs are working together, it can be found on this Google Doc CCG Policy Raw Data.

I have also downloaded all the policies and they are available here: England Libre Prescribing Policies

How Prescribing is Managed

There are various ways that prescriptions can be given to patients, but again there is variation by area.

The most common way to prescribe is via Amber listing.  This is where the specialist initiates prescribing in secondary care, but then passes the ongoing prescribing to primary care.  This is clearly the most pragmatic method as prescriptions are commonly fulfilled in primary care, particularly when they are repeated.  The issue for a CCG with this method is that there's a perceived loss of control and that GPs can prove difficult to control in terms of prescribing.  Perhaps the example in Nottinghamshire above demonstrates this.

However, some areas have decided to Red list.  This means that prescribing can only happen in secondary care with no option to prescribe via a GP.  Administratively this is difficult and I am led to believe costs the NHS more as VAT is payable on purchases.  Also, it is likely that more sensors will need to be prescribed at a time which will raise the risk of discontinuation of use and other associated problems with supplying many sensors at a time.

Now that I've presented my new research, it's time to get back onto safer territory and go through the actual prescriptions written in the UK with the most up-to-date data available.

Again there are increases in all the countries, with England still lagging well behind in terms of % of T1 population that are getting Libre on prescription.  In the echo-chamber online, it is easy to think that everybody who wants Libre is getting it - it is far from the situation with most people in England still having to self-fund or go without. 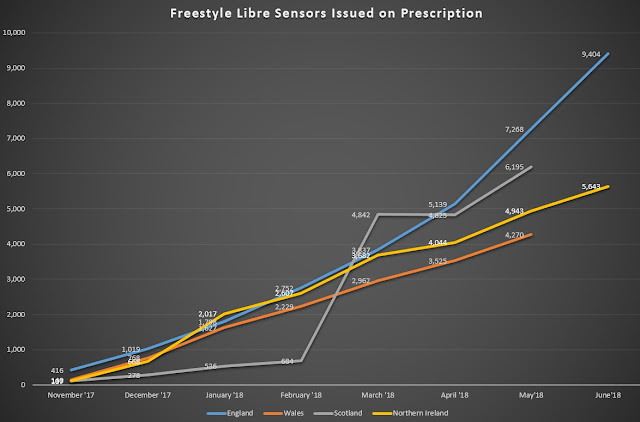 Finally, looking at the CCGs where the highest percentage of T1s have a prescription.  Here is the top 10.

This shows that there are pockets where there are high levels of prescribing, with Nottinghamshire, Lincolnshire and Manchester particularly leading the way.

There are important times ahead, with reviews in some of the biggest CCGs, like Birmingham/Solihull, East of England (18 CCGs) and Bristol (BNSSG) due in the next couple of months.  The success or otherwise of these will set the agenda for the final quarter of 2018 and into 2019.  Patient pressure needs to continue to be exerted in all areas that are undecided, have rejected funding or have set criteria that are more challenging than the RMOC criteria.  There is no excuse for ignoring the RMOC advice - it's costed, logical and compiled by experts.  CCG leaders need to not try to reinvent the wheel - they need to be helped by their local experts to interpret and understand the guidelines set and implement them in a consistent way.

There have been excellent examples of advocacy around the country, with two pieces that have featured on the BBC, one on Breakfast and one on East Midlands Today.  Both Devanshi Mavani and David Stephens, amongst others spoke eloquently in these pieces and managed to get the message across effectively and concisely.  There was an interesting (read: silly) comment from Graham Jackson, a senior member of the NHSCC (the organisation that is the 'independent collective voice of CCGs).  He said on the BBC breakfast piece:

It's not a postcode lottery; it's a reflection of the need

We need to call out nonsense like this - I did ask them for clarification and after some pushing received this:

Graham was explaining the national context of the commissioning dilemma and the responsibility they have to balance the needs of the individual against those of the entire populations that they serve, with the limited funds that they have available.

Clear?  Well, not really!  But at least they responded and only took a week with reminders!

By the way, there have been some comments on social media about the validity of the RMOC guidance - I am not advocating that RMOC is perfect - it is far from it - but it is a way that CCGs can fund, as the cost implications are minimal - it's largely risk-free.  In the future, we'll look back on the RMOC policy and say that it was too restrictive and ask why we were so careful with prescribing of Libre but for now, it will do and is the best we can hope for.

I hope to be able to report some changes of policy next month.

ANNE MOYES said…
Thank you for this thorough account of the current situation, Nick. It's fascinating to see the stats, and to find myself serendipitously in a location whose CCG is 3rd in the Libre prescription rankings. This particular CCG has no major teaching hospital, we have no university medical school, and the county's hospital trust has spent much of the past decade in special measures. For anything out of the medical ordinary, we have to travel to Nottingham, Leicester or Sheffield. It raises lots of questions, in particular, how the users' downloaded records will be used to help improve our diabetes management when the level of diabetes expertise in the region isn't particularly high.
29 August 2018 at 13:48

Libre prescribing is an interesting journey and an insight into the inner workings of the NHS, which are often hidden from view for a lay-person. I am glad there is progress, but the variation makes no sense. When the decision was made to list Libre on prescription and the RMOC guidelines published, that should have been the end of the story.

I am really hoping that the areas that have significant numbers of funded patients are collecting good data that will stand up to scrutiny and demonstrate to the more cautious CCGs that Libre is low risk and high potential benefit, both in terms of healthcare outcomes and cost reduction.
29 August 2018 at 14:18

March 13, 2019
In order to find out the situation around the country for Libre prescribing now that the national policy has been published, I have made the decision to contact many of them to find out their plans.  I have arbitrarily chosen to contact all English CCGs that in December 2018 prescribed Libre via Primary Care to less than 5% of their population (and one specific request from a group member).  I had hoped this would be a small list, but there are 135 CCGs on the list.  I may have bitten off more than I can chew, but I'm committed to doing this and feeding back.  It worked before and hopefully this level of scrutiny will bring similar results. Below is a screenshot of the base document I am sending to each of the CCGs - it has some fields that are merge fields, so don't worry about the brackets and codes in the document (I found a typo, which has now been corrected too) .  The major piece of work with respect to this is finding the right person to contact.  However, I have s
9 comments
Read more

April 29, 2019
One of my get well cards! On Tuesday 23rd April I was leading my wife's horse from the field. My daughter was behind with her horse (we're honestly not that posh.. We do all the work ourselves and do it cost effectively.). A third horse decided it didn't want to be left in the field, so pushed past and frightened the horse I was leading. It bolted and ran straight into me, fracturing my tibial plateau. (the part of the tibia bone just below the knee). The next day, I was operated on under GA to permanently pin/plate the knee area back together. See x-rays below for what they did. Continued below, but in case you don't want to keep reading, here is the current situation as of 1st June I'm still at least four weeks off being able to bend my leg, but am basically OK.  Claire has all-but had her diagnosis of early-onset rheumatoid arthritis.  Not great, but hopefully treatment will start soon. And...as of 5th June, I'm now able to bend the leg and put f
5 comments
Read more