March 09, 2007
My calves have been causing me real hassle over the last 4 days. I have had cramp in them and can't seem to shake it off. The diabetes nurse suggests it is lactic acid build up from the cycling rather than diabetes related, but I'm not sure. Ibuprofen doesn't seem to be helping either. Will see how it goes over the weekend and see my GP if necessary.

Had a good evening yesterday. After working late, I bought an indian take-away on the way home. Thought I would risk my favourite, Chicken Korma. Didn't have naan bread, as that wouldn't have been sensible! I took some extra insulin (12 unit as opposed to my usual 8 or 9) and was in the low 4's two hours after the meal. It is really great to know that I can have this treat occasionally.

Spoke to Severn Trent Water about the sewer issue and they suggested that it was more than 2 metres down so may not be an problem for our extension. Maybe we will get it built one day!

Had a manically busy week with lots of frustration, but at least the weekend is almost here. My mother is visiting for the weekend, which will make things more relaxing. The weather looks good...maybe I'll get the lawn cut.

Thought I would include a picture of Josh looking cute, for no other reason than I like the photo! 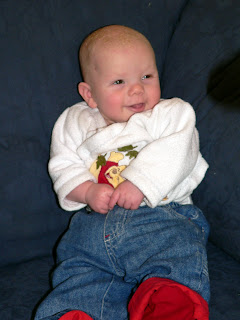