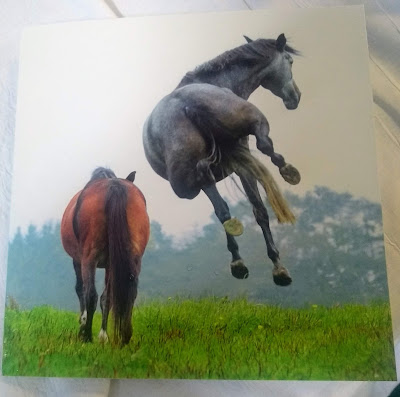 One of my get well cards!

On Tuesday 23rd April I was leading my wife's horse from the field. My daughter was behind with her horse (we're honestly not that posh.. We do all the work ourselves and do it cost effectively.). A third horse decided it didn't want to be left in the field, so pushed past and frightened the horse I was leading. It bolted and ran straight into me, fracturing my tibial plateau. (the part of the tibia bone just below the knee). The next day, I was operated on under GA to permanently pin/plate the knee area back together. See x-rays below for what they did.

Continued below, but in case you don't want to keep reading, here is the current situation as of 1st June

I'm still at least four weeks off being able to bend my leg, but am basically OK.  Claire has all-but had her diagnosis of early-onset rheumatoid arthritis.  Not great, but hopefully treatment will start soon.

And...as of 5th June, I'm now able to bend the leg and put full weight through.  Attending intensive physio to try and get it working properly again.

I finally got out of bed two days later and walked a little around the ward aided by a frame and two physios. Pain still being controlled by morphine and analgesics.

I'm not sure how long I'll be here in hospital. Looks like up to 8 weeks non-weight bearing.

So, not neglecting Libre, here's some info on that too.. I've had 5 x-rays, a CT scan and an operation under general anaesthetic and Libre didn't miss a beat. Levels were stable, but slightly above target throughout.  My temperature has been around the 100F mark throughout too.

In the meantime, my wife broke her foot (fractured metatarsal) in a stairs fall, five weeks ago.  This healed but she is now showing adverse symptoms across all of her, which a blood test has identified and....<I broke off at this point>...continued...

I had a call to say that she was now being admitted to hospital due to breathlessness and concern about her deteriorating condition.


If you want to see the scar (impressive) then please click here...no blood, but not for all!

The diagnosis is still unknown....but believed to be kidney-related.

Claire is now on steroids, which have controlled her symptoms.  She is back to hospital today for more tests.  Fingers crossed something shows up to help know what's going on.

For my part, I am now walking with a zimmer frame. My pain is still controlled by morphine and analgesics. so still plenty.  I've had enough of being on the ward now - mainly due to night shifts.  They are over-stretched but also lack common courtesy and empathy.  At no point last night did any of the team come and introduce themselves and make any kind of contact that wasn't set down in the care plan.  Not sure what happens next - perhaps a transfer, perhaps home (unlikely), perhaps stuck here in Ward 15 with 5 others (please no!).  Will anyone come and rescue me?!  Need to be out in time for my birthday next Wednesday.

I am continuing to progress well at home - not able to go upstairs yet.  The leg hurts when I have it held down for any length of time, but think that may relate to the staples pulling on the cast..  The staples come out on Wednesday...a lovely birthday treat for me!  I'm hopeful that I'll then be able to be a little more comfortable.

Claire's diagnosis is still unclear - however, it could be Acute Rheumatoid Arthritis or a related illness.  This isn't great, but at least there are a number of treatment pathways.  I hope we will know more after her appointment on Thursday.

After the appointment - it is believed it could be arthritis caused by a virus rather than a long-term condition, but it's a complete unknown.

I've had my staples out - all 33 of them!  I'm feeling much more human again - even made it upstairs for a shower - bliss!

I've added the X-rays to the photo link above.

Specialist appointment today - the wound is healing well, but he's signed me off for a further six weeks and I'm not able to bend my leg during that time.  Glad the weather is good and the cricket season is on as that should help to stave off some of the boredom!

Thanks for all your support.

Didn't know you had been off due to this, incredible mate, my best wishes go out to you and your wife for a speedy recovery

Time is a good healer

Unknown said…
Omigoodness, Nick! Had no idea! Praying for a speedy recovery for both of you!