December 05, 2018
So far, I've only been looking at Libre prescribing and the variance therein.  However, there is a lull in those proceedings at the moment, with announcements from the DVLA and NHS England keenly awaited around Christmas.  Until then, I will still be working on CCGs that are refusing to answer basic questions - Gloucester and the Warwickshire CCGs to name but two.

Yesterday, I attended Parliament as a guest of the JDRF to take part in the Medical Technology Group discussions.  Matt Hancock (Health Secretary) spoke at the event, which was attended by patients, patient groups, lobbyists and industry insiders.  The main purpose of the event was to launch Ration Watch:

I have filled in their response form and hope that it will be possible to influence some of their discussions.  If readers of this blog have anything to add, then there's a place to register via their homepage.


Items which should not routinely be prescribed in primary care: an update and a consultation on further guidance for CCGs  Consultation Document

Spurred by an announcement of the start of a consultation by NHS England about a review into prescribing of test strips for people with Type 2 diabetes and prescribing of pen needles. I decided to look into this further.  When announced this received the predictable headlines, often missing the point, making people angry...causing general outrage.  As Partha Kar writes in his blog

..the basics are simple for the NHS. We are, whether we like it or not, in a cash tight environment. So if product A works the same as product B, then we use the one which costs less. That's pretty simple really- and ignoring that principle in a tax funded system is a poor approach to take in a policy role.

I thought that my experience with Libre data may help me to cut through the mass of data and find out the true situation.  I have reviewed all needle, lancet and test strip prescriptions using open source data from NHS England.  I'm not doing this from a point of expertise about any of these specific items, but to look at the variation and then try to explain it.  From the information I have compiled, I am sure that the approach currently adopted across many areas is not correct.

The consultation on pen needles covers all uses for diabetes, so could have an affect on me (although I was changed to a cheaper needle without notification).  The recommendation being consulted on is to:

I'm not sure whether the £5 level is appropriate, but it is an aspirational target.  There are fifteen needles in that price range - (not all lengths are the same price): 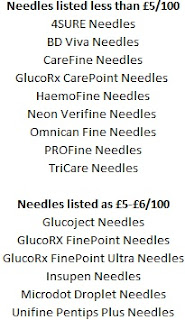 As yet, I have not looked into the quality/specifications of these needles, but I suspect many/most within the CCGs haven't either unless there's been a concerted effort to review.  What does paying for more expensive needles get you?  I've learnt a bit about bevels and people have mentioned caps and quality of metal.  However, this isn't my focus here.  I'm looking at variation.

As an example, I took just two needles, which are widely prescribed.  One is £5.55/100 and one is £9.01/100.  I believe the specification of each of them is broadly similar.  I looked at a comparison of the prescribing of just these two needles and compared rates of each.  I then ranked the CCGs from the one's with the highest volume of the most cost-effective item. 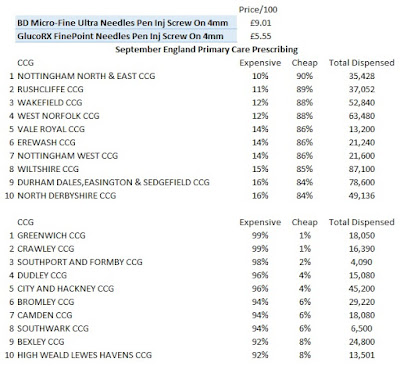 I am making no comment about the merits of one device against another - that's for an expert to decide.  However, the level of variation is large and this is just one example.  Is this a big deal?  I think it is...just swapping everyone on the BD brand to the GlucoRX brand would save the NHS £1.4m a year.  Whether this is an appropriate swap, I don't know...but it might be and the question hasn't been asked.

This data demonstrates clearly to me that some areas have reviewed and made concerted efforts to buy cost-effective needles.  Other areas probably haven't looked at it at all.  Nationally, around 30% of needles prescribed are more than £6/100 - seeing the bottom ten CCGs on that chart with over 60% of needles costing more than £6/100 is a clear demonstration of an uncontrolled process that needs reviewing urgently.  It would be good to have feedback from any of the top 10 CCGs as to whether there have been issues as a result of a policy to prescribe cheaper needles.  They may not be right - but the other CCGs should be watching and learning from their experiences.

As an aside to this, one piece of data surprised me significantly and that was the prescribing of safety needles.  Predominantly these are the BD AutoShield Duo at a cost of £28/100.  They account for 3% of all needle prescriptions and 13% of the costs.  There are high levels of prescribing particularly in the Durham area.  A DSN I spoke to does not think they are necessary in most situations.  The annual cost of safety needles to the NHS? £3.5m!

Test strips are expensive..but they're pretty amazing and are required by most people who have diabetes, often in significant numbers.  They range in price from about 10p to 30p each.  Ketone test strips are also included and cost between £1 and £2 each. The cost to the NHS of these strips is around £13m/month (£157m/annum).  The range of average cost by CCG goes from 18p/unit to 27p/unit on average. 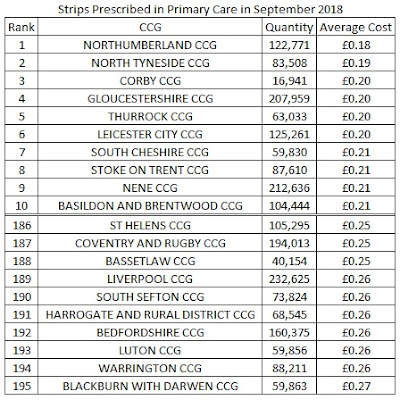 The saving associated with moving to an average cost of 20p/unit would save the NHS about £4m/month.  Whether this is appropriate or desirable is unknown, but like with meters, must be worthy of looking into further.

Regarding Ketone strips, the large majority of prescriptions are for Freestyle Optium strips at £2/unit with three times as many prescribed as the Glucomen Areo strips at just under half the price.

I've only briefly looked at the data here.  I can't really get excited about lancets as each one lasts me a long time.  The situation appears to be quite different.  The two lancet types that have the most prescriptions Fastlclix and GlucoRX are both similarly priced and there are no significant volumes of any cheaper lancets.  There are however fairly high volumes of Unistik 3 lancets, which are twice as expensive as these two brands  There may be a good reason for this though.

As I've mentioned, I'm not commenting on the quality, customer service or specification with respect to these devices.  However, I think the NHS has a duty to make scientific judgements about what to prescribe to which patients.  This data demonstrates to me that many areas are not undertaking these types of reviews, indeed some of the most cost-effective areas may have only considered price when coming to their decisions.  It makes me further believe that the CCG structure doesn't work for prescribing of devices.  Prescribing policy requires up to 195 different decisions to be made.  CCGs neither have the resources nor expertise to review this in a timely manner.  That is why I firmly believe that a specialist central endocrinology service needs to advise (or mandate) CCGs to prescribe appropriate, cost-effective devices.  I think that the result of a proper review with clinically-based finding will result a switch to more cost effective devices in appropriate situations and a reduction in prices in some of the higher volume products.

The consultation can be contributed to by anyone via NHS Consultation and there are meetings around the country - There's one in Birmingham which I'm planning to attend as I think it's important that people with a stake in the decisions take the opportunities presented to share their views.

Giles said…
Seriously a DSN you spoke to thought that safety needles are unnecessary, bet they wouldn’t be saying that if she’s suffered a needle stick injury!
7 December 2018 at 08:24

I think I should clarify a little. The data I have is the NHS prescription data for primary care prescriptions. I suspect most DSNs won't get their safety needles via this route and almost certainly not the DSNs in hospital settings. I am sure that there are good reasons to have safety needles in certain settings, but 3% of all needles (1 million needles a month) at a cost of £300k seemed a disproportionately high figure. The DSN asserted that in many situations the safety needle was not required and this seems to backed up by very low usgage in certain areas...to take two CCGs as an example.

These two CCGs have almost exactly the same number of people registered. Due to these needles costing so much, this must be worthy of further scrutiny.
7 December 2018 at 08:44

Di said…
On the subject of safety needles: https://www.ncbi.nlm.nih.gov/pmc/articles/PMC5112762/
tl;dr No differences in safety were observed in the study between use of safety needles and not.
Most of us have been using "unsafe" needles for years (personally, since the age of 7, unsupervised, and now with very limited sight) and never injured themselves with one. Though for a very small percentage of diabetics, they might be beneficial.
7 December 2018 at 17:56

March 13, 2019
In order to find out the situation around the country for Libre prescribing now that the national policy has been published, I have made the decision to contact many of them to find out their plans.  I have arbitrarily chosen to contact all English CCGs that in December 2018 prescribed Libre via Primary Care to less than 5% of their population (and one specific request from a group member).  I had hoped this would be a small list, but there are 135 CCGs on the list.  I may have bitten off more than I can chew, but I'm committed to doing this and feeding back.  It worked before and hopefully this level of scrutiny will bring similar results.

Below is a screenshot of the base document I am sending to each of the CCGs - it has some fields that are merge fields, so don't worry about the brackets and codes in the document (I found a typo, which has now been corrected too).
The major piece of work with respect to this is finding the right person to contact.  However, I have some m…
9 comments
Read more

March 07, 2019
The NHS England policy for prescribing of Freestyle Libre has now been released.  There is a link to the document at the bottom of the page, but the key part of the policy can be viewed below.  Here is the Link to Policy
Post a Comment
Read more