October 17, 2018
In the world of Libre, progress is happening - often slowly, often deeply frustrating but punctuated by bright lights of hope, optimism and tales of persistence bringing results.

Here are the highlights of the past month or so:


On the face of it, these developments look like positive news - however, the reality is somewhat different for some of them.  Starting with a positive.... 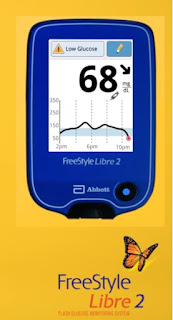 Libre 2 was announced by Abbott on 1st October at the European Association for the Study of Diabetes (EASD) meeting in Berlin.  There was initial surprise, excitement, which then turned into lots of head scratching and questions coming from all angles!  Libre 2 is an enhancement to Libre that will allow it to communicate alarms via Bluetooth to a suitable receiver.  Initially at least, it won't broadcast levels, just alarms.  To get a level, the sensor will still need to be scanned.  It is thought that the full step to CGM cannot yet be made due to regulatory reasons, rather than for any technical reason.  However, there are plenty of questions that still remain.   So, for those of us using Miaomiao, it won't give us any benefit.  However, for those using pure Libre, the addition of alarms will be excellent - Abbott have said that they won't charge for the upgraded meter and the sensors will be the same price - more news when I hear.

After a long fight by patients and clinicians in the area, a policy was finally released in this area on 5th October.  Reading through, this seems to be amongst the most pragmatic policies yet released.  The policy covers both CGM and Libre prescribing, which is sensible.  I think the key element that makes this policy pragmatic is this part of the policy: 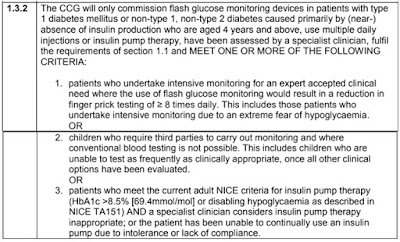 I'd argue that point 1 is the most likely to be met by patients and is the criteria where the most benefit in using Libre will be realised.  This criteria has been removed from a few of the recent criteria (it's in the RMOC guidance) for no logical reason apart from to deny as many people as possible the opportunity to get Libre on prescription - more of this later.  This criteria allows the clinicians to have discretion and use their expertise to allocate the funding to Libre most appropriately.

There is a slight black mark, or should I say red mark on this policy, which came to light in discussions with a clinician in the area.  Libre is going to be "Red Listed" in the area.  This means that prescribing can only happen in secondary care and it won't be via a standard FP10 prescription.  Currently, just under 20% of prescribing CCGs red list the Libre.  There are multiple reasons why it's a bad idea, including VAT being payable on every device purchase by the NHS and the administrative burden of having to provide Libre at a hospital clinic, usually in larger numbers than via a community prescription due to the length of time between appointments.  The clinician I spoke with was mystified why this decision was reached.  It is strongly hoped that this will be reviewed and a more sensible prescribing pathway found.

Onwards from positive news to deeply frustrating news.  The EoE PAC advises the 18 CCGs in the East of England.  Their decisions are not binding, they are not answerable to the general public and are unable/refuse to engage in any meaningful dialogue.  CCGs in the area naturally follow their guidance and unfortunately, the guidance they've released is very poorly thought through and puts patient at the bottom of the pile of considerations.

They have gone for a kind of RMOC guidance, but have removed the 8+ test criteria.  In summary, you can get Libre if it might lead to avoiding going on a pump or you're pregnant.

How many people will be eligible in the EoE?

With the figures for Northern Ireland showing nearly 40% of T1s having it on prescription, why does the EoE advisory group think this volume of patients getting Libre on prescription is acceptable?

I hope that enough stakeholders in the EoE will make a fuss and get this poor decisions reviewed as soon as possible.

**STOP PRESS** (I've actually done that loads of times as part of my real job!)

I have now heard that the Mid Essex CCG, which are part of the EoE group, are going their own way and saying that Libre hasn't enough evidence to prescribe and that it's inaccurate and basically a waste of money...it's beggars-belief!

Prescribing numbers keep rising across the UK, with nearly 40% of Northern Ireland T1s getting Libre on prescription.  Below are the charts showing latest data of Primary Care prescriptions in the UK (no data for secondary available for England). 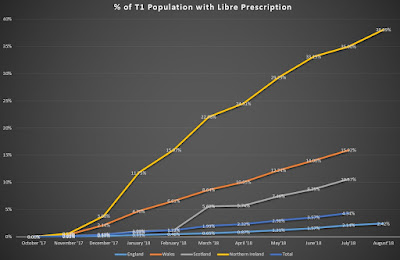 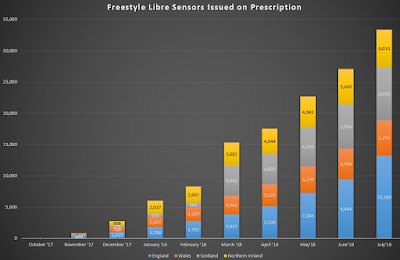 In August, just 24 CCGs had zero prescriptions fulfilled for Libre in England.  Four of those are in the North East, where the assertion is that they are being supplied via Secondary Care only.  Another three of those CCGs are in the Lancashire area listed above.  So all that remain as not prescribing are 9% of CCGs - some like Corby CCG are small, so less than 5% of the population are living in a "Libre desert"

The question arose on Twitter about whether GPs can prescribe despite the CCGs refusing.  It is a developing situation, but it appears that it should be possible and there's very little the CCG can do about it.  This is being backed by GPs at the highest levels of the GMC so will be interesting to see where this eventually leads....maybe even as far as starting a rethink on the role of the CCGs and the processes therein.  Watch this space!

Finally, it was Libre's birthday this week - the 16th October saw the four year anniversary of the web-shop opening for business.  I pointed this out on the Facebook group and many commented on the huge impact Libre had had on their lives and those of their families.

PS - My latest HbA1C is out...and it's rather good (imho!).  Here's the progression since I started Libre.

As I've mentioned before, I don't think I'll be eligible for Libre on prescription but my results (anecdotally) show what can be achieved with commitment and tech.  This further backs up my creation of the "Diabetes Square" to illustrate that all four factors need to be in place to enable control of the condition. 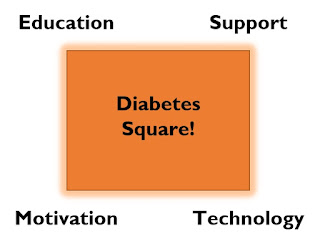