May 23, 2018
I often see questions about supply and get asked for updates.  I try and keep in touch with retailers to ensure that any issues are quickly resolved and people get the full picture.  Here's the current 'state of play'.  I've taken my March update and updated it, as much of the information is still relevant.

Getting it on Prescription

Firstly, the prescribing of Libre.  Wales have said yes, most other areas have said perhaps.  This map shows the current status by CCG: Diabetes UK Joint Policy Tracker.  There are improvements, but this demonstrates the postcode lottery.

The data on prescribing rates are published but this data is woefully slow to become in the public domain.

Here's the data so far: 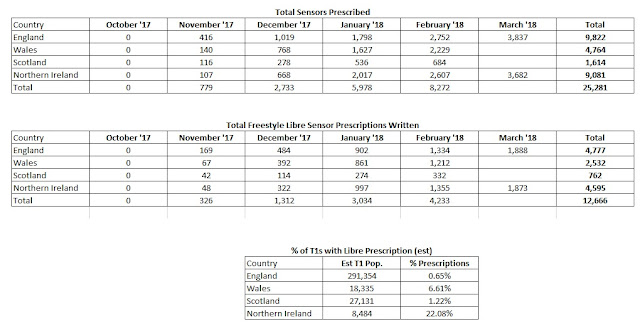 There are CCGs like Manchester and many London CCGs that have now approved prescribing, but it's slow and notable CCGs have rejected funding, for example Birmingham & Solihull (BSol CCG).  Myself and others are working to overturn the negative decisions.


Buy Libre Retail (often not for the faint-hearted!)

What about retail supply?  Well that's where it starts to get messy, frustrating and it could/should have been so simple!  An RRP from Abbott and a note to say that Diabetic products are usually VAT-exempt with an appropriate form would have simplified our lives considerably.

It turns out, because we (the #gbdoc) found out that you can buy sensors over the counter.  You can, but it's a lottery as to whether the pharmacy

a) believes you,
b) knows how to order
c) knows what to charge
d) understands that diabetic-only products like this are VAT-exempt.

So many people have been made to feel as if they're asking for the wrong thing, don't know what they're talking about and are 'trying to pull a fast one'.  It's so frustrating!  I've called numerous pharmacies and had Twitter exchanges with retailers' Head Offices to try and get them to get a coherent strategy.  With many pharmacies, even big chains, they just don't get it!

It is clear that there are correct ex-VAT prices for each of the main pharmacy chains:

**STOP PRESS** In an message to me today (23/5), Boots have said that they will no longer supply Libre sensors retail.

Many are supplying cheaper...mainly because they didn't 'get the memo' but £35 sensors (cost price) are out there outside Superdrug...I've bought two myself!  There's also plenty of £63 sensors out there...don't ever accept that price, it's wrong!  Prices as low as £29.17 have been reported.

I decided to try and collate those pharmacies that were being helpful and this information is available here: Map of pharmacies who supply.  The data in this map can be amended by anyone with a Google account.

**STOP PRESS** There are reports of quotas in Superdrug stores imposed by Abbott and reports that some Boots saying they've had a memo from Head Office saying they can only supply prescription sensors (the latter has been confirmed).  I've spoken to both Head Offices about this.

Abbott will now only supply existing customers and a maximum of two sensors per 28 days.  However, sourcing from pharmacies can be easier, cheaper and quicker.  Postage is currently free.  The current restrictions are meant to be lifted in July.

Delivery does seem to have improved slightly, with orders taking around a week.  However, there is plenty of variation.

Finally, please get behind the Diabetes UK Campaign to try to reduce the postcode lottery that is currently restricting prescribing of sensors to many patients for no reason apart from location.  The criteria that most (not Somerset) CCGs are using is the RMOC Criteria.  This is costed and logical, but unfortunately restrictive.  However, if CCGs aren't even agreeing to this, then I think they are doing patients a disservice and it should be challenged.