April 11, 2018
The first couple of weeks of April has seen the remaining UK data for sensor prescriptions released for January 2018 and today (11/04), the data for February for Northern Ireland has been released.

Here is a summary of the total sensors prescribed and the number of prescriptions written for the four countries of the UK.

The increase in sensors prescribed is shown graphically below. 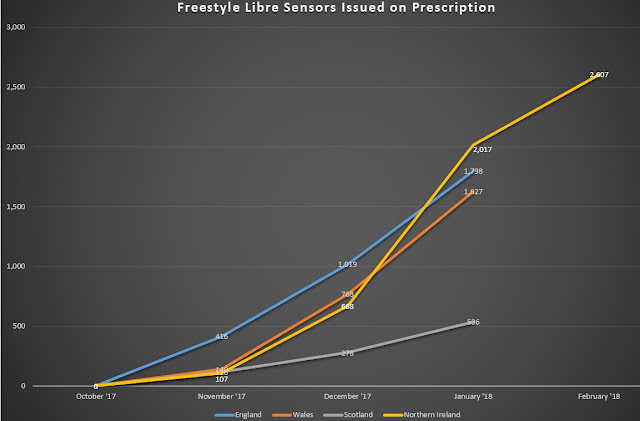 It will be interesting to see how the increase continues and at some point it will level off - if the London area CCGs make a positive decision, then I think the England spike will dwarf anything that's gone before.

In the meantime, Abbott still don't seem to be able to supply effectively.  I'm not convinced that manufacturing capacity is behind the long lead-time.  Logistics are undoubtedly complex and will take time to sort.  Meanwhile, it seems sensible to procure sensors from pharmacies - if you can convince them to read their emails from Head Office!