March 15, 2018
Can anyone advise on where my logic falls down? It must do, but this has been playing on my mind for a while. The basic question is...why would someone on MDI need to test 5-8-10+ times a day? I can feel people's heckles being raised already, but keep reading.

I'm T1 on MDI, Levemir (split dose) and Novorapid (peak action 1-3 hours, tail of action 3-5 hours). Clearly, testing regimes must be very different if you're on a pump.

Have a look at the table below showing a typical 'Nick Day'. OK, I don't eat lunch, both because I like the nice flat line I get on my Libre (hence better A1C, I hope) and I've found I don't need it. 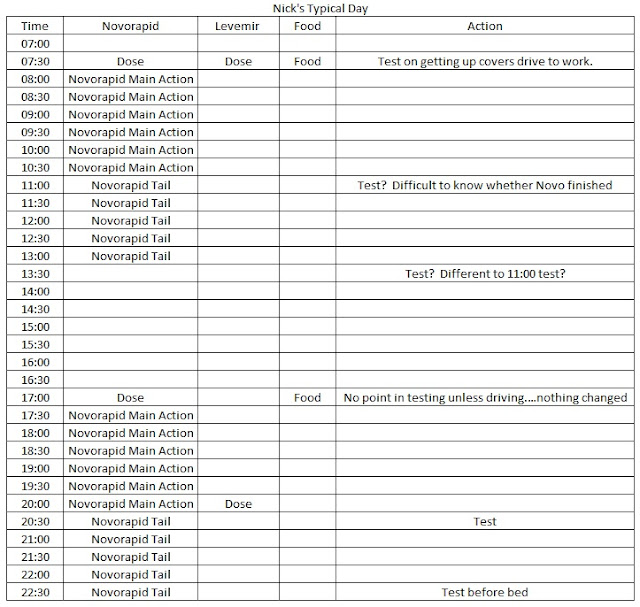 If you look at the table, I've only managed to find five times where I think it could be worthwhile to check levels - in time, I think one of the morning ones could go too, so in reality four. At all other times, it seems pointless to me as either nothing should have changed (perhaps the 'should' is the key here) and/or the insulin is still working, so you can't really know what's going to happen and adding more insulin could be a bad thing and cause levels to 'roller-coaster'.

It's ringing in my ears that an eminent diabetologist is saying that a good A1C without testing more than 4 times a day is very difficult indeed. I don't understand why.

Where else would people test where I don't? Is it just because I don't eat lunch, don't drive much and don't particularly keep fit (and am not female, as has been suggested) that my testing regime can be simpler?  I do exercise, but don't play sport or go to a gym.

I'm sure books will explain this further, but would like some views.