November 14, 2007
Not blogging since August? I have loads of excuses! The main reason is that we have been away from home and my in-laws only have dialup access to the net. The building work on the extension is finally finished. Our builder finished 10 days early and inside budget. He and his team are absolute stars! The final month of the build was particularly messy, and meant that we were without cooker, sink and use of the conservatory. For that reason, we moved out to Claire's parents' house. We have been there 4 weeks now and should hopefully move back home at the weekend. They have been very kind to us and it has been good for Claire to have some help, particularly as Josh is in a frustration phase, where he really wants to be mobile, but just can't quite get there! It will be so nice to have our own space back and also to get Josh in his new room.

Josh was 1 on 8th November. He doesn't have any friends his age yet, so we had a low-key family party to celebrate. Claire made a cake from a really cool mould that she bought in Lakeland plastics: 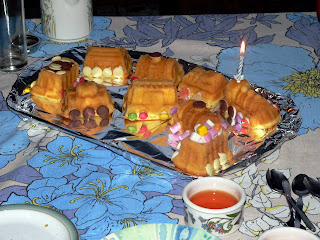 Abby loved opening his presents for him and was impressed with the variety of Thomas the Tank Engine memorabilia that he received.

As I said, the building work has now been completed. We are determined not to let the finishing work drag on for months or years. There is a huge amount to do, but we have been working every evening and most weekend days to make progress. We have now completed Josh's new room: 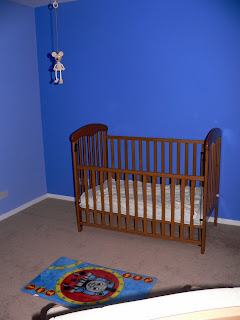 So it is all ready for him to move into and not a moment too soon.

The ensuite to the new bedroom 4 is tiled (by my fair hands) and has the shower cubicle and shower fitted. We have the flooring and the walls to complete.

Downstairs, the utility room and cloakroom need decorating and the kitchen needs a floor and to be tiled and painted. The kitchen was fitted on Monday and Tuesday of this week. The electrics are being done today. It looks absolutely fantastic: 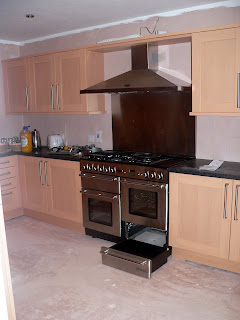 There is still lots to do, but it will be worth it and will make the house a great place to live.

Away from home, work has been good too. With the promotion of my boss to run Oldham and Liverpool print sites, I have a new boss. Luckily for me, the No.2 at the site got the job and I have been promoted into his position. I am now Production Manager. In reality my role has not changed much, but the title is enabling me to do things slightly different and I am practising being more assertive. This is something that doesn't come natuarally, as I hate upsetting people, but it gets results and has to be done. I don't ever resort to swearing however, so remain in control.

Next week we are going to Somerset for a team building day. It will be great to see some of the team outside the work environment and to try and build relationships between the shifts and the management. We have also appointed a new shift manager, who will add strength to the shift team and will be a positive influence for the future.

Overall life is good...I hardly think about diabetes; it is just a routine. It is frustrating sometimes when blood sugars are inexplicably high or low, but I don't let it concern me. Most of the time, I am in the range that I think I need to be. Times outside the range are short,easily rectified and can be attributable.

Anonymous said…
HEY MISS CHATTING WITH YOU ON DD!!! NICE JOB WITH THE KITCHEN!!!!