July 07, 2007
So, I have finally got the motivation to update my blog. There's probably nobody reading it anymore, but just in case...here goes.

What has been happening? Well, I am still honeymooning in terms of my diabetes, so need less insulin than previously. It is proving a bit difficult to judge and I had a bad hypo last week. Basically, I was almost unconscious and Claire had gone out for the evening! Luckily I found some wine gums and came out of it eventually.

Last weekend was Josh's thanksgiving. Our church doesn't really approve of christenings of babies whose parents are not both confirmed. As neither of us are, then a thanksgiving was the choice. It turned out to be a lovely service and the small group of people that we had meant that it was a great day. The sun even shone for most of it. 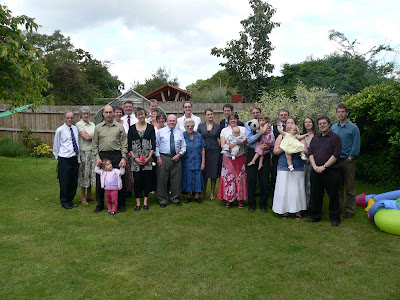 This weekend is the Open Day at work. I have helped organise it, including getting a person to create a special newspaper for the day and be there to add pictures and make a live newspaper to put on the press. It is quite nerve-wracking as we need it to work in front of maybe 100 people! I'll let you know how it goes.

Finally our extension starts a week on Monday (16th). Our builder is nervous about the sewer, but I just want him to get on with it and find out what the situation is. We can't do much about it, we just have to deal with it and the financial implications (could be £10k...ouch!) I'll do regular photos on here so you can see how the work is going. It is predicted to be 3 1/2 months. It will be mahem, but ultimately worth it.

Finally, we have had good news on Josh's eyes: the opthalmist was very surprised at his progress and say they have very rarely seens such an improvement and that his vision appears to be approaching normal. He is definitely seeing lots and grabbing at things. It appears that he did not see much for a few months, and therefore his development is slightly behind, as he is 7 months and not sitting. However other development targets (how awful!) are within what we would expect. Overall though, he sleeps well, has finally come of the breast and loves his food (except jars of baby food!). Here he is: 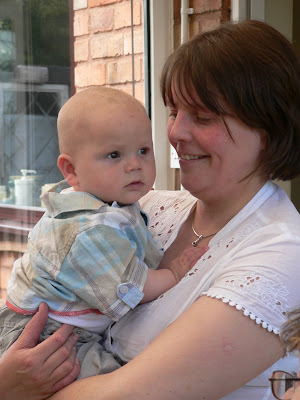 justme said…
good luck with the building! hope you don't get too many suprises! good to hear things are better with josh!
and i still peep in here ever so often to check for updates :)
9 July 2007 at 09:16

Ellen said…
Great news about Josh! Hurrah! And good luck with the building work! I still look at your blog, by the way. Funnily enough, we have a client who makes diabetes test strips and meters. I met someone at a client party we had recently who has worked as a consultant for diabetes. I mentioned you and she would be more than willing to help, so I'll give you her details (they're at work). Sorry we won't see you next week while we're back.
16 July 2007 at 04:11

NickC said…
Thanks Ellen and 'justme'! It will be good to talk to your contact about diabetes. 'justme' (not real name!!) is also a type 1 diabetic so we can share experiences with her. Sorry can't make do next week. It is just so difficult to do things when you have 2 little ones....
16 July 2007 at 10:29